Location: Dagshai can be easily accessed using a link road that diverts from Dharampur. One can even take the link road from Kumarhatti, lying on the Kalka-Shimla National Highway.

Description: Dagshai is known as the most ancient Indian cantonment established during the British era. It is located nearly 6000 feet above sea level and promises breathtaking views to the visitors. The nearby area has a dense cover of pine trees, as well as oak trees. People visiting Dagshai notice the influence of British era, as every house, monument and building here is constructed in the architectural style prevailing during the colonial era and has its own unique grace.  The region of Dagshai has five villages, named Dabbi, Dagshai, Bughtiala, Jawug and Chunawag. The place has been named after Dagshai village and the word Dagshai denotes “mark of a ruler” symbolizing a permanent mark made on the forehead of prisoners using a hot iron. This practice prevailed during the Mughal Period. After being marked, prisoners were transported to Dagshai village. Some of the popular tourist attractions of this region include a massive Central jail located in the heart of this town. Another magnificent attraction is a Catholic Church and an ancient cemetery.

Activities: Dagshai attracts a lot of tourists and nature lovers to spend time in its refreshing environs. It also has a playing field where soccer is played. It is the same field where Durand Cup was hosted.

Other Attractions in Kasauli 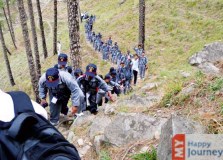