Location: Located on the popular Goubert Avenue, The French War Memorial is one of the important attractions in Pondicherry.

Description: The French War Memorial in Pondicherry commemorates the brave warriors who laid down their livesfor their country during the First World War. It was constructed in the year 1971. The First World War began on 28 July, 1914 and lasted until 11 November, 1918. It was the deadliest global event centered in Europe, in which more than 9 million combatants were killed and it involved numerous revolutions in many nations of the world. About 47,746 of them were Indian soldiers who got killed and 65,126 were wounded during the World War I. On a visit to this place, it seems like the memorial is telling the sonnet of age-old history and French legacy. The majestic architecture of this memorial also makes it quite popular. Tourist must visit this place and give a tribute to the great Indian heroes who played such a significant role.

Activities: On 14th July, Bastille Dayis held every year in India. On this day, the French War Memorial is beautifully ornamented and homage is paid to the brave martyrswho made the ultimate sacrifice for their country. 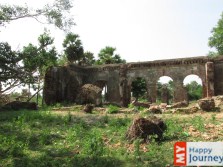