A funerary monument, Chini Ka Rauza contains the tomb of Allama Afzal Khan Mullah, who was prime minister in the court of Shah Jahan. Built in the year 1635 under the rule of Shah Jahan, this monument decorated with the help of glazed tiles, is a landmark of the Indo-Persian architecture.

Octagonal shaped central chamber boasts of 8 beautifully carved alcoves. Two gateways that surround this high walled monument lie in the North and South direction. Different kinds of inscriptions in Persian and Islamic languages adorn the walls. However, the Afghan style dome remains a significant feature of this mausoleum.

If a person wants to see the Persian style of architecture then this is the place to visit. This structure presents a work of excellence that was done by the architects of the Mughal era. When planning a trip to Agra, this monument should always be on the “must see” list of the tourists. 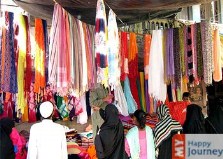