An internationally known place of pilgrimage, Sree Nagaraja Temple is an ancient temple that is devoted to the serpent gods and is believed to be blessed by the creator of Kerala, Lord Parasurama. This temple is situated in the area that surrounds Alleppey and is headed by a female priest. This place is regarded as a major center of worshiping the snakes in the whole of Kerala, as there is no temple more famous than Sree Nagaraja Temple.

Being an important place of pilgrimage, this temple is visited by a large number of devotees all around the year that come here to pray to Nagaraja. 16 acres of magnificent lush green forest encircles this ancient temple, making it look more beautiful.

The ritual of Sarpakalam Pattu, which is conducted once during a month, witnesses a large number of participants. This ritual involves drawing the images of Serpent God, by using vegetable colors, on the floor.

Other Attractions in Alleppey 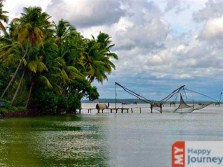