Mukerti National Park and the lake are widespread across the whole of the eastern region, irrespective of being located in the southern most part of the Nilgiri. The park is a home to numerous animals and has been constructed in a way that they can freely live under protected forests. The park is under the management of Government and a lot of efforts have been taken by them for saving the wildlife especially the endangered and extinct species of animals.

Mukerti Lake has been constructed with a park and it is flocked by various species of birds. The water in the lake is a boon for the ducks living here and makes it an ideal environment for them. The lake also provides boating services to the visitors and people enjoy boating in the lake after taking a walk in the park.

Nilgiri Thar also known as Hamitragus Hilocrius is the major attraction of this park. The park is full of Sambhar, barking deer, Nilgiri Marten, Otter, Jungle cats and Jackals. Some of the easily spotted birds include laughing and whistling thrushes, Woodcock, Wild pigeon and Black Eagle. A great variety of butterflies including the blue admiral, Indian Red Admiral, Indian Cabbage White, Hedge Blues, Rainbow trouts and the Indian Fritillary can also be spotted in the park.

Other Attractions in Ooty 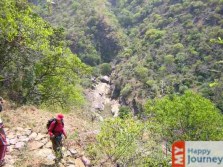