In the year 1598 a part of the well known St. Thomas Church was converted into the famous Diu Museum which consists of a large number of stone inscriptions, antique statues and wooden idols. Considered as an archaeological treasure, this museum displays a large variety of artifacts and also tells a lot about the Portuguese rulers who ruled this territory.

This place has always remained on the must visit list of history buffs as it unveils the era during which the region was ruled by Portuguese. Here you can explore the culture and traditions followed by various rulers. Large collections of statues which are acquired from different sources adorn this beautiful museum.

Special lighting and multicolored fountains of this magnificent building fascinate its viewers by presenting a beautiful view. Tourists can also witness a wide range of items which have been displayed in this museum that lies in the western India. 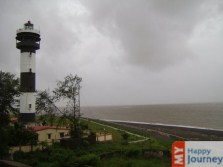