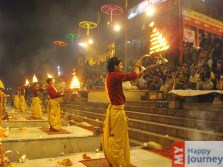 Also known by the name, Kashi and Banaras, Varanasi is appropriately regarded as the land of Moksh. More than 5000 years old city of Uttar Pradesh, it is one of the holy cities of India.

As per the legend this city was founded by Lord Shiva on the banks of the holy river Ganga, and its mention can also be found in the sacred epics like Ramayana and Mahabharata.

This city is perfect for all those who are fascinated with the Hindu beliefs. Along with traditions, culture and notions this place provides the tremendous opportunities to have a glance of Hindu lifestyle and faith. Thus it is one of the important places to learn and get knowledge about the Sanskrit and Hindu Philosophy. The city has a large number of temples; in fact you can see one at every few steps here. These enchanting temples are the testaments of the customs and religious belief of the Hindus.

The city is also a main center of art, craft, education as well as ethnicity. Banaras Hindu University is one of the best institutions of India and is the dream university for every student of India, but only a very few can make it to this place. Another renowned thing of Varanasi is the Benarasi silk saris. These Brocade saris are done in gold and silver threads and are considered a vital part of the Indian bridal trousseaus.

It is a great city in India which allures a large number of tourists every year because of its astounding places to see, attractions, sacraments, dedication as well as feel of placate and calm.