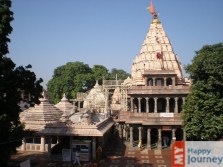 Ujjain the cream of the crop.

A pious center of Madhya Pradesh, it is sited on the banks of river Shipra, and is renowned as a sacred place since time immemorial. It is a holy city, and a brief mention about this city by the name of ‘Avantika’ can be found in Hindu scriptures. Earlier this city was known by the name of Ujjain and later it was changed to Ujjayani, which means the glorious conqueror.

Ujjain is one of the seven sacred cities of Hindus. For more than 2000 years, Ujjain has been considered as the main center of the spiritual activities. This place is considered very sacred and there is a story behind this. It is said that during the time of Sagar Manthan, a small drop of nectar got spilled on Ujjain, thus making this a very sacred place.

Wonderful statuettes and monasteries can be seen speckled around Ujjain, leading to the acceptance that Buddhism flourished in this part of Madhya Pradesh during the 4th century. A superfluity of these, along with ruined temples and a miscellany of old houses, will take you on a journey of the historic supremacy of the Mauryan Empire. It is not only a place with religious importance, but it is a great source of inspiration for astronomers and poets as well. In fact, the marks of some of the most prominent rulers of India who lived here can be seen till date, in the form of incredible architecture and amazing structures.

Ujjain allures innumerable tourists from across the globe because of its festivals and fairs. Some of the very popular festivals celebrated here are Kumbh Mela, Ardha Kumbh, and Shivaratri. It is no more an old city which is only carrying the ruins of past on its shoulders, but today it has emerged as a perfect combination of the glorious past with the vibrancy of modernity. Ruined temples, ancient monasteries and amazing sculptures will provide you a number of opportunities to explore the rich heritage of this amazing city.