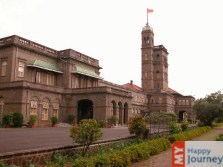 The second largest city of Maharashtra, it has got the privilege of being the eight largest city of India. With its deep rooted culture, it would not be wrong to call this place as the cultural capital of Maharashtra. Over the last few years Pune has got a lot of recognition in the National and international arena, and due to this it has now become a prominent tourist destination of Maharashtra.

Pune has managed to flourish as a center of learning and art, and this is the place from where a number of revenue and judicial reforms were started in the country. Some places of tourist interest in this city are Shaniwarwada, Saras Baug, Aga Khan Palace, Parvati Temple, Khadakwasla Dam, and Sinhagad.