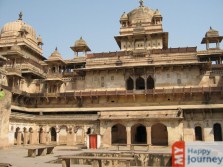 Orchha – an amalgamation of royalty and natural beauty

Situated in the Tikamgarh district of Madhya Pradesh, Orchha represents the splendor of its great emperors Bundelas. Orchha basically means a ” hidden place”  and is located 15km away from Jhansi, on the banks of River Betwa. This artificial small island is positioned in the Bundelkhand countryside and is blessed with immense natural beauty and magnificence.

It is believed that a Bundela chief, Rudra Pratap Singh, laid its foundation in 1501 AD. He, along with his skilled craftsmen, built this unique dynasty with numerous collections of forts, temples and forest adding a charm to its attraction. Amongst all other renowned places, the Orchha Fort is the prime magnetism, because of its wonderful buildings and architectural design it has a special place in the heart of tourists. These buildings were constructed during the reign of different rulers, but today only two of them are most renowned, namely Raj Mandir and the Jahangir Mahal. They have the same spark and beauty carved within its walls and doors.

The splendor of the bygone period can still be witnessed within this historic city. You can witness the royal palaces, magnificent forts and chhatris. The poetry carved on the walls of its temples leaves one spellbound. Though Orchha is small village with forest and lush greenery and ancient architecture in its vicinity, it still preserves the rich heritage of the medieval time, thus making it a highly enchanting place to visit in India. Make sure during your visit to Orchha you taste the famous sweet “Kalakand” and other exotic food items available on the road side and restaurants.