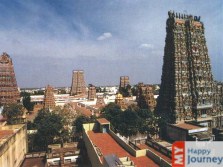 Situated on the banks of the Vaigai River, Madurai is more commonly known as the temple city of India. Famous as the kingdom of the Pandya kings in the past century, Madurai has now become a place of great cultural heritage backed by a strong mythological history. It was said to be more than 2500 years old with a commercial center developed in 550 AD. Owing to its mythological roots, people from several different religions and cultures gather here to celebrate a myriad of festivals and traditions in Madurai. The city was architecturally designed in the form of a lotus and is thus also known as the lotus city. There is a beautiful temple constructed by the Pandyan kings and Lord Shiva is worshipped here. According to a fable, it is believed that the showering of divine nectar led to the bloom of the Jasmine flowers which are found in the city. The city was ruled by the Nayal emperors in the 16th century. A beautiful temple dedicated to Lord Shiva was constructed by the Pandyan kings, though Christianity also spread its roots in the area during the Tamil dynasty.

One of the most popular tourist attractions in Madurai is the Meenakshi Sundareswarar temple, an architectural marvel. The temple is surrounded by concentric circles to harness the power of the cosmos. Several small temples can also be found at every crossroad of the city.