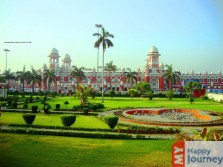 Lucknow is the capital of Uttar Pradesh which is one of the states in the northern part of India. It experiences extreme temperatures. The summer and the winter temperatures in Lucknow vary a lot.

Lucknow is an amazing place; one can pay a visit to this place in any season of the year. However, the months from October to March are considered favorable for such a visit. Lucknow witnesses extreme temperatures; the summers are very hot, the winters are cold and the rainy season is humid. The summer witnesses a maximum temperature of 42 degree centigrade and the winter touches the lowest of 8 degree centigrade. The summers being hot it is better for the tourists to avoid visiting Lucknow during this time. The monsoon season is humid; that makes it difficult to travel in Lucknow during the rainy months, besides it is difficult to go outdoors in the rain. So, the best period to plan a visit to Lucknow is the period from October to March. The climatic condition and the scenic beauty are best for the tourists to visit Lucknow during that period.