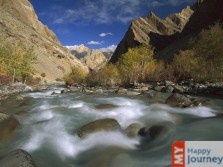 Ladakh, which is situated on the banks of the famous Indian River named Indus, is an extremely popular tourist spot located in the Jammu & Kashmir state. Ladakh is famous by several names like “The last Shangri La”, “The Moon Land”, “Little Tibet”, “The Broken Moon”. Leh tops the list of places worth visiting and others on the list are Alchi, Hemis, Lamayuru, Zanskar Valley, Kargil, Pangong Tso, Tso Kar, Tso Moriri and Nubra Valley.

Ladakh is loaded with breathtaking lakes, monasteries, mountain peaks that promise exotic views of the surrounding areas and spell-bounding terrains. Ladakh is situated at an altitude of approximately 3500 meters. Its geographical location is in the midst of Karakoram and Himalayan range. The valley of Ladakh is enclosed between parallel ranges, named Zanskar and Ladakh.

The places of interest here include Hall of Fame, which is a museum showcasing the arms seized from the Pakistan army and pictures along with biographies of the brave soldiers who fought the battle. Besides this, it also houses artifacts related to the art and culture of Ladakh, its history, wildlife, etc. Leh Palace is another spectacular place to visit and is a nine storied shining marvel and was constructed during the 17th century. General Zorawar’s Fort also known by the name of Riasi Fort was used in the past to protect the wealth of the rulers of Dogra in Jammu.