Kochi lies on the western coast of India and shares its boundaries with Western Ghats in the East and the huge waters of the Arabian Sea. It is a well-known city of the state of Kerala. World Travel and Tourism Council has rated Kochi in the top three destinations for tourists from all around the World.

The city offers a heartening experience of the history of India, as it has been under the rule of diverse dynasties including the Arabs, Chinese, British, Portuguese and Dutch. It has been a spectator to the first ever European colonial settlement as well. Kochi has progressed enormously in the past few years and has become the commercial capital of Kerala. A house of international ports with superlative facilities and infrastructure, along with a well-connected hub of road and railway transportation, Kochi is the second most popular city after Mumbai, which is the first industrial capital of India.

Irrespective of being called a small town, Kochi is no less than an Indian Metro city and covers Fort Kochi, Ernakulum, Mattancherry and a few other surrounding villages and towns under its boundary. 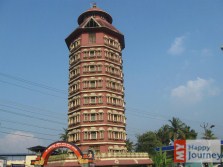