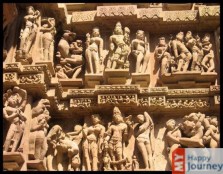 Situated in the northern Madhya Pradesh, in the temple architecture of India, the Khajuraho complex remains unique.

It is said to have been established by the son of Moon god and is recognized for its stone carved temples. These temples have survived centuries of timeline to be where they stand today. The city witness tourists coming from different parts of world, to foresee the divine saga of life and love and its culture carved into stone.

These groups of Hindu art and Jain temples, built by craftsmen and a society who were unabashed by sex or their depictions. It is believed that about 85 temples had been made but only 22 survived. In 1986, the remaining sandstone temples have been recognized and listed by UNESCO among the seven wonders of India. However, these temples distinguish themselves as treasure of passion and erotic fantasies instead of worshipping divinity like any, tourists can easily reach by rail, bus or air. The tourist’s attractions include colonially carved 3 groups of temples - Western, Eastern, and Southern, with each temple carrying connotation and a number of gracefully sculptured Jain temples.

One among the travelers itinerary in India, Khajuraho offers shopping opportunities, various kinds of handicrafts being sold in the state, at best of prices. With all its mystical allure and splendorous past, Khajuraho has various legends allied with its foundation and is all set to win the heart of the visitors.