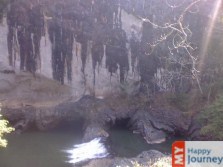 DANDELI- A Destination for Adventure Lovers

Located in Uttara Kannad, Dandeli is a small hamlet which is surrounded by the Deciduous Forests of Western Ghats. This place is well known as an adventure sports destination amongst the tourists and is considered to be the top destination for white water rafting. Housing a large number of paper mills, Dandeli is also famous for production of paper.

It is believed that the place got its name from the local deity Dandelappa, who was the servant of Mirashi Landlords. According to folklore, King Dandakanayaka, was so impressed with the beauty of the region that he named the city after himself.

Second largest sanctuary in the state of Karnataka is housed in Dandeli and is known as Dandeli Wildlife Sanctuary. Declared as a tiger reserve in 2007, dense forests of this sanctuary are crisscrossed by the streams of Nagajhari and Kaneri River. This place is a natural habitat of tigers, elephants, sloth bear, leopards and many other species of animals.

Dandeli is famous for some historical landmarks, as well as for various religious spots. Some of the famous attractions which attract a tourist’s attention are Sykes Point, Ulavi temple, the Supa hydroelectric dam, the Syntheri rocks and the caves of Kavla.

For the tourists who love various adventure sports, Dandeli is a place worth visiting. This place offers different adventure sports, which include trekking, cycling, mountain biking, canoeing or river rafting. To experience natural beauty at its best, plan a visit to Dandeli at the earliest.