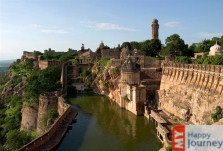 CHITTORGARH- A City of Historical Wonders

Spread over an area of 700 acres, Chittorgarh in the state of Rajasthan is well known for its impressive forts, towers, palaces and temples. Various mythological tales are associated with the history of this city. One such myth is that Bhim, a Pandava, visited Chittorgarh to meet a sage in order to seek the secret of immortality from him. But due to his impatience, he was not successful and stamped the ground in anger. A water reservoir, known as Bhim Lat, was created at the place where it was stamped.

The audacious history of the city is well known worldwide. The eventful past of the city can be clearly seen in the impressive royal buildings and magnificent forts. Entrance to the city is attractive as seven huge gates are present; however the main gate remains the Ram Pol.

Various attractions that have made this city famous, especially among those who have interest in the ancient period, are the Chittorgarh fort, Vijay Stambh or the victory tower, Rani Padmini’s Palace.  Many exquisite temples, such as Tulja Bhawani Temple, Matri Kundiya Temple or the Jogniya Mata Ji Temple are must visit places for religiously inclined people.

Travelers can also enjoy in the lap of nature and spot a variety of animals at the Bassi Wildlife Sanctuary. Spread over an area of15,290 hectares, this sanctuary houses panther, wild boar and mongoose, among various other animal species. Exotic migratory birds can also be sighted by the visitors. Hence this beautiful city of Chittorgarh is definitely worth a visit.

Kirti Stambh (The Tower of Fame)