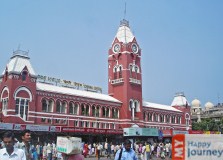 Chennai, placed in the shores of Coromandel Coast, which was formerly recognized as Madras, is the capital of Tamil Nadu. The name Chennai originates from the word Chennapattanam or even Chinnupattanam.

History is engraved in every corner of the city. Despite the fact that Chennai was influenced by the South Indian kingdoms, the renowned history of this town, began in the colonial times when the British developed the city into a major urban centre.

Chennai is well-known for its lively dramatic plays, coconuts, temples, and silk sarees and more importantly is endowed with the rich heritage of art, culture, carnatic music and classical national dance of India, Bharatanatyam.

Spread over an area of 200 sq kms, along the Bay of Bengal, the city offers a kaleidoscopic view of tourist attractions, Museum, Tiruvalluvar memorial, verdant green patches, high-tech, high-rise buildings apart from this the jewel of Chennai, Marina Beach forms the major attraction and inhabitants from all around the country and the world make it a vibrant place for tourism.

The city is a leading player in the field of education and sports accompanied with number of reputed institutes and stadiums mark the significance of the two in Chennai. It is also the second largest facilitator for IT and BPO’s in India, after Bangalore.

A subtle blend of folklore and the modernism have transformed the city economically and culturally, giving it a distinct character. It is the disembarking point for those who want to understand more about the rich historical legacy of the country.