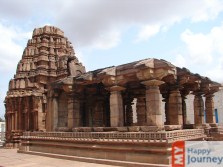 Badami, situated in Bagalkot district of Karnataka, was an imperial capital of Chalukyas. During 6th and 8th centuries Chalukyas were the ruler of the two states, Karnataka and Andhra Pradesh, while Badami was their majestic capital. Pulakeshi 2 was the bravest among Chalukyas who had overpowered many kings during that era, out of which Mahendra Verman was the one who was conquered by Pulakeshi.

The primeval Chalukyas of the royal capital Badami were qualified in some of the most superlative traditions and customs of Dravidian architecture. This was very much evident by the construction and decoration of the South Indian temple and the Nagara mode of North India. The attractive combination of north and south conceded for the building design of Dravidian temple.

The township of Badami was also known as Vatapi earlier. It is nestled in a valley at the base of channeled red rock that rings Agastya Lake. The royal capital Badami is recognized for its beautiful cave temples, carvings and fortresses. Badami is the location for the Brahmanical and Jain cave temples of 6th-7th century. Most intriguing thing about these temples is that four cave temples are interconnected with each other with stairs. The temples are made by cutting up of a solid hard rock, accompanied and carved with an extraordinary unique interior, which exhibits an intense level of art and architecture related to that period.

Kannada is the regional language spoken by the people of Badami, along with Hindi and English. Traditional Indian cotton wear is the general attire of the people. Best season to visit is from September to February. The weather in summer could range from 20 to 42 degrees and in winters it ranges from 13 to 32 degrees. Those, who have the curiosity to explore various forms of art and architecture and beautiful temples, Badami is certainly the right destination to be at.