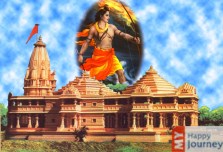 AYODHYA- The City of Lord Rama

A famous pilgrimage centre among the Hindus, the city of Ayodhya is situated on the banks of River Saryu. The story of Ramayana revolves around the life of prince Rama, who is believed to be an incarnation of Lord Vishnu and closely related to this town. According to Ramayana, Lord Rama was born in the city of Ayodhya which was considered to be the capital of Surya dynasty.

This holy city experiences extremes of both hot and cold climate, but being associated with many temples and a glorious past, large number of devotees throngs the city to offer their prayers to different deities. Various festivals that are celebrated here give the city a colorful look which makes Ayodhya look more charming. Festival of lights, Diwali is celebrated with a lot of enthusiasm as it marks the return of Lord Rama after 14 years.

Considered to be a sacred pilgrimage town, the attractions located in and around the city has a lot to offer to religious inclined people. Some of the important temples of the area are the Nageshwarnath temple, which is believed to be built by Kush, lord Rama’s son and the famous Chakra Harji Vishnu Temple. Another important structure is the Kanak Bhawan that houses images of both Ram and Sita wearing crowns.

For shopaholics this city has different markets from where they can purchase wonderful artifacts and souvenirs. Shopping in Ayodhya can be a different and memorable experience. So visit lord Rama’s own city and know more about tradition and history of this holy place.