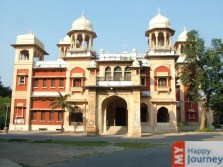 One of the largest cities in Uttar Pradesh, Allahabad is located on the spot where three rivers- Ganga, Yamuna and Saraswathi meet. Earlier called as Prayag, it is believed that Lord Brahma chose this place at the beginning to perform Prakrista Yaga. A mention of Allahabad in Huan Tsang’s work is also marked.

The city of Allahabad, which literally means “The City of Allah”, was founded in 1575 by Mughal king Akbar. A provincial capital of Mughals, this city was later on captured by the Marathas. Center of Indian independence war in 1857, Allahabad later on became a significant part of the India’s freedom movement.

Weather remains comfortable throughout the year, thereby making it a good tourist destination. Different types of celebrations keep the ambiance enjoyable all through the year.  Months from October till March are comparatively better to enjoy various attractions and for visiting different attractions.

Large numbers of temples which are present in the city, such as Hanuman Mandir, Kalyani Devi Temple, Mankameshwar Temple, make the land of Allahabad sacred. Many more not to miss attractions while on a trip to Allahabad are the famous Allahabad Fort, Allahabad Planetarium, Ashoka Pillar, to name a few.

The enormous Kumbh Mela is held here once in every twelve years and is celebrated with enthusiasm and gaiety. Innumerable visitors from all over the country gather here to enjoy it. Sacred to Hindus, bathing in the water during the mela is said to be purifying and people take a holy dip in the confluence. So pack your bags and visit this popular city for an enriching experience.